Blac Chyna & Rob Kardashian Are Engaged! But What Do The Kardashians Think...

Blac Chyna and Rob Kardashian have shocked their friends and family by reportedly becoming engaged!

On Monday night, Blac posted this pic on her insta page with the caption 'YES!...!...!'

It wasn't too hard to figure out what she might be saying yes to!

According to E Online, the newly engaged couple celebrated in a club in LA afterwards. However, as usual with the Kardashian family, the drama had only just begun...

Since announcing their engagement, Blac Chyna's Mum posted a photoshopped pic on Instagram of the Kardashian and Jenner sisters holding the train of Blac's wedding dress and crying. The caption of the pic was also less than complimentary, saying that the girls would not be invited to the wedding.

Rob's Mum Kris Jenner is also said to have disapproved of the engagement. Kris allegedly told Rob that he is 'making a mistake' and the Kardashian family believe he is rushing into the decision. His sisters apparently agree. According to the Daily Mail, sources say that Rob's family are worried that Blac is manipulating him and that their relationship is purely a rebound one.

Meanwhile, one person who has been surprisingly supportive of the recent news is Blac's ex and Kylie Jenner's boyfriend Tyga. Tyga tweeted: 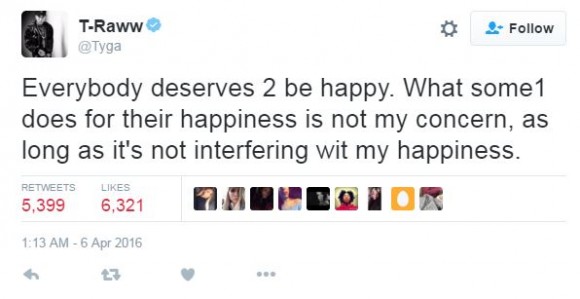 We really never though that Tyga would be the mature one in this situation!

To add to the drama, Blac (real name Angela White) is planning on formally joining the Kardashian crew by taking the name Angela Kardashian after they get married. We can't wait to hear what Kris has to say about that...