Celebrities show the world how Halloween should be done! With their amazing costumes each year they are constantly having to go bigger and better the following year.

Here we can have a look for some of the best celebrity Halloween costumes of 2015.

How will they get better than this next year!

We will start off with everyone's favourite couple. Of course Jay Z and Beyonce and we can't forget little Blue Ivy. This year they went as the cast of 'Coming To America'. This is a great costume idea as it is unique and a clear favourite in the Beyonce/ Jay Z house household.

This is a hilarious costume by Channing Tatum as he was spotted roaming around as Winnie the Pooh at his daughters Halloween Carnival. He later topped this as him and his wife showed up to a party as Cat in the Hat. Channing continues to make us laugh!

This costume just has to top them all as Heidi Klum has her amazing transformation to Jessica Rabbit who is from the cartoon Who Framed Roger Rabbit. She really captured the cartoon look and has yet again our done herself. The Queen of Halloween! 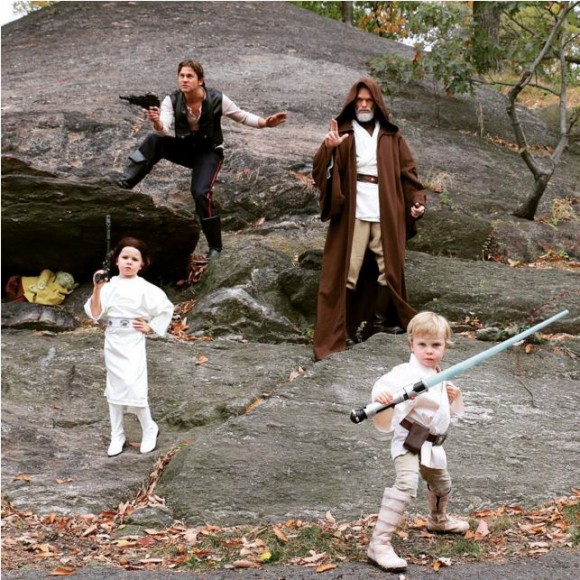 Neil Patrick Harris and his family celebrate Halloween as being the cast of Star Wars. This look is great for a family costume idea as everyone can get involved. They are obviously very excited for the new Star Wars movie coming out soon! Once again they continue to out do themselves as previous years they have put together amazing Alice in Wonderland costumes and Peter pan characters.

Miley Cyrus this year went as a tooth and her friend as the tooth fairy. This is a simple idea but is perfect for best friends or even couples! You can be funny and cute at the same time. Great costume Miley!

Tyra Banks is surprisingly an extremely convincing Richard Branson and shows us that there are no limits to a Halloween costume! This is an amazing costume all together.

The Rock (Dwayne Johnson) is an angry pop-eye as he says that 'one size' costumes definitely doesn't fit all. He still looks the part and the smaller costume makes the Rock look even more massive is that is possible. I'm not sure he can top his 2012 Hulk costume when he just painted himself green and flexed. Dwayne is up there with the best on Halloween!

Nicki Minaj stayed HOT this Halloween as she pulled off this gorgeous fairy princess outfit. She managed to stay as glamorous as always and has an amazing costume. What more could you ask for?

The avengers were in town as Kourtney Kardashian and her kids dress up together as a family and looked amazing! Two Captain America's, Spiderman and Ironman, we all feel safer already!

Justin Beiber went as the classic Jackie Moon, the Will Ferrell character from the movie Semi-Pro. Hilarious outfit as Justin shows he isn't taking himself to seriously.

We're ending it with the amazing Kylie Jenner shows off her gorgeous costume as a ninja and her friends along side her as ninjas also. Kylie here is killing it as she looks unbelievable and is now the stunning ninja we have seen!

I hoped everyone had an amazing Halloween this year and are already planning outfits for next year! I can't wait to see some of next years outfits from these celebrities! I don't know how they will manage to top this!

From HOT to hilarious we have had it all this year and these celebs are really what you have to be aiming for on Halloween! Happy Halloween everyone from IKRUSH and until next year stay spooky!